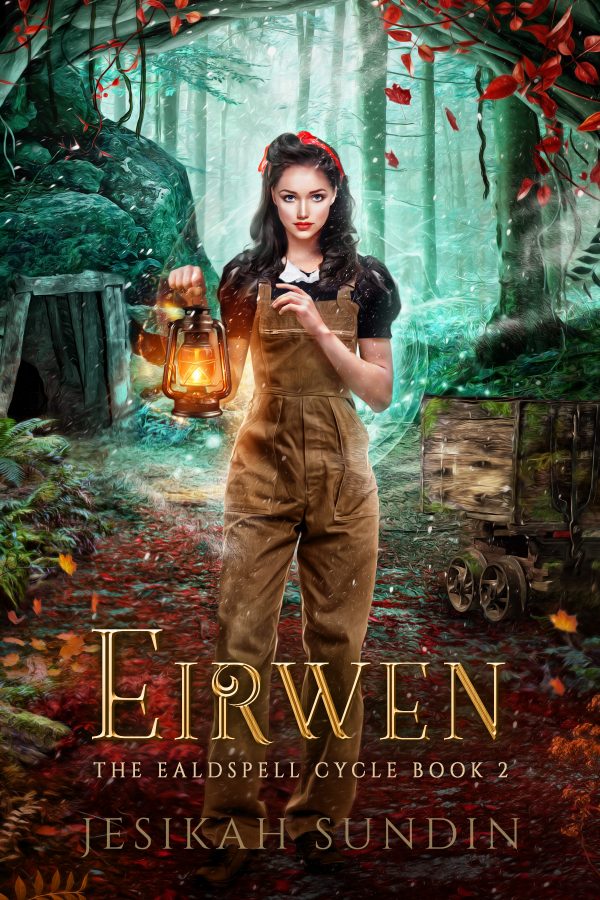 Hidden in the Dwarven mine camps since infancy, an Elven princess with a heart of stone finds herself at the center of an uprising. She must choose between the kingdom she was destined to save or the prince who wakes her heart to life.

Release date to be announced soon.

The girl leapt over a large fern and grabbed a low-hanging limb. The oak tree’s bark dug into her palms, but she didn’t mind. Swinging her legs back and then forward, she gracefully moved with the momentum. Then she was running again, over pine needle- and oak leaf-littered ground, around remnant snowbanks from the winter past, and by prickly fir boughs.

“There she is!” a familiar voiced shouted from behind.

The girl peered over her shoulder and stuck out her tongue.

Mogrik and Lufric, identical twin brothers from the Dwarven mines, had nearly caught up to her. Which she couldn’t allow or she would lose her bet. And if she lost, she would have to scrub mineral residue off various mining tools for an entire week. Practically an eternity to her ten-year-old sensibilities.

Her rough spun skirt snagged on a protruding limb on a fallen log. She yanked and tugged, cursing under her breath. Girls could run faster than boys if they weren’t required to wear ridiculous layers of fabric. Boys wore britches. They could walk around shirtless, too, and nobody scolded them for revealing so much skin. It was entirely unfair.

The twins were nearly upon her. A muscle twitched in her jaw, her body rigid with rage. She would not lose this bet. She would reach the fishing creek before the brothers and prove that girls were just as capable and resourceful as boys. Perhaps more so. After all, they weren’t running a race in a skirt.

A spark of electricity fired from her chest, zipped down her arms, and seized her breath. The girl placed a dirt-smudged hand to her breast, over her stone heart—a stone made from brennanite, the rare mineral found only in the mountains and foothills of Clifstán. Magic shivered through her body, her crystal organ a willing conduit. Snowflakes drifted in her veins. Harsh, bitter winds with every mechanical beat. She could feel her skin pale, as cold as the moon, as white as a winter’s storm.

Nothing would slow her down, not even the unexpected presence of magic. Though perhaps she should fear what that meant. The Dvalin fae––Dwarves––didn’t possess the kind of magic that affected her.

The girl jumped over a rock and ducked beneath a needled bough. A pinecone hooked onto strands of her loose hair, snapping her back a step.

“Really?” she huffed at the sky. “Are you gods not amused yet?”

Lu laughed, unaware of the anger seething from her glacial stare.

Mo’s lips twisted into a sneer right before he shoved his brother into a thick huckleberry bush.

“Baby?!” Lu jumped to his feet, fists clenched at his sides. “I’m not even a full candlemark younger than you!”

Slowly, the girl crept backward, careful not to make a sound. The Dvalin were known for their tempers, the twins especially.

Another wave of magic vibrated through her. She clutched her chest. Shaky breaths fluttered past her clenching teeth and froze the air in front of her face. Her gaze swiveled over the forest in search of the faerie who used her cold, raven stone heart for spell weaving. Leaves rustled above her head. The ferns waved their fronds in reply. A strange melody, almost like a soft lullaby, sang on the breeze. Swirling around her. Nudging her toward a deer path.

The girl wiped her nose with the sleeve of her muddy dress. Then, tiptoeing through the wild grass, taking care to muffle the leaves beneath each booted step, she eased onto the narrow clearing. And once she disappeared behind a large oak, she was off again.

The sun-dappled forest blurred by her. Underbrush tried to hook onto her cloths as she ran past, but she angled her body effortlessly despite the uneven ground. Up ahead, water rushed louder than the rustling leaves. A giggle escaped her panging chest. The fishing creek was nearby. She would win.

Her elation, however, was short-lived.

And her face pinched back into her trademark scowl.

A few steps away, the deer trail tapered off into thick huckleberry bushes and various brambles. Sighing, she pushed through the underbrush, cursing the twins once more, until she reached an extraordinarily large rock covered in moss, ferns, and patches of snow. Where had this boulder come from? She thought she knew every boulder and crag in Sorengaard Wood.

Magic swirled around her once more, insistent, inviting. And even more strange than the unexpected rock, the pain her chest eased and warmth tingled down her limbs. Curious, the girl crept forward, her eyes darting between shadows and trees. The fishing creek and race were all but forgotten. But she didn’t go far. On the other side of the rock, a stone’s throw away, sat an old, dilapidated cottage. The lulling melody seemed to seep from the rotting timbered walls, and the magic’s pull drew her forward.

Her fingers trailed over the decaying hewn logs. Had this cottage always been here? The girl cupped her eyes and pressed her nose to a dusty latticed window. Inside was dark—too dark to make out any objects. And unnaturally quiet too. Squaring her shoulders, she lifted her chin a notch and braved her way to the entry door. A current of warm magic tingled up her arm when her fingers curled around the iron ring and pushed. The door creaked open without much resistance, as if someone were waiting for her, and the girl swallowed back her rising fear. But instead of running away, she checked over her shoulder for any moving objects. The forest was quiet. Worrying her bottom lip, the girl stepped into the interior shadows.

Silky cobwebs fluttered with her movements. Thick dust covered the floor and a small table. A broken chair rested against the far wall beside a stone hearth, the coals long cold. In a nearby corner, a large linen-draped object caught her eye. The girl tilted her head and blinked. Glittering gold peeked out from the lower edge of the moth-eaten cloth. Not a speck of dust collected on the protruding object either. Strange, but too wondrous to ignore. Worrying her bottom lip again, she tip-toed toward the cloth and pulled.

Magic rushed through her body in waves of sunlit warmth. The old cloth fell to the ground and landed in a hushed thud by her feet, but she barely registered the sound. A mirror of sorts, made entirely of polished gold, leaned against the rotting wood untouched by time. She had seen a lot of precious gems and ores in her life. But never had she seen a mirror made of pure gold, nor one that hummed a melodious lullaby.

Her muted reflection gave her pause. Was she really as disheveled as the warped image suggested? The girl considered the dirt under nails, then shrugged.

The girl scowled over her shoulder. Her foster mother would scold her endlessly for abandoning her midday chores. She would probably add more for her to do as punishment as well. Dalbrenna hollered for her once again, this time more persistent.

Resigned, Eirwen twisted toward the door and shouted, “Coming!”

The race! She had forgotten all about the race, the very reason she had left the mines in a flurry of annoyance.

Well, if she was going to lose the race, be chastised, and do extra chores, she might as well enjoy her discovered treasure a while longer. Plus, she was covered in mud. Her foster mother would probably demand a good scrubbing too. Eirwen grimaced.

She considered the large, gold mirror once more and caressed the surface with a single finger.

Heat sparked up her arm and grasped her heart in fiery ribbons.

Then light burst from the mirror and forced her back several steps.

She started to scream. The pain in her chest unbearable.

The light dissolved into images: A mother holding a newborn baby in a spacious room with a blizzard gusting in from a broken window. Anger and disgust flashing across a majestic woman’s face. The most beautiful woman Eirwen had ever seen. Was she a queen? Runic energy draining from an ancient stone wall and pouring into a squalling baby—the same baby. An elderly Dwarven woman taking the babe from the beautiful woman’s arms. Sobbing nurses. The queenly woman handing a knife made from brennanite to an elf with golden brown hair twisted into a knot and decorated in cherry blossoms. A cloaked shadow raising the same knife at a small bundle in unfamiliar woods. Elves fighting. Swords clashing. The baby curled inside a frost-tipped fern with fronds for blankets. A toddler with raven-black hair and snowflake-white skin throwing rocks at a mine cart. A young woman in miner’s clothing yelling at a handsome man in an immaculate military uniform. A coffin made of brennanite—

“You better answer your mother, Princess.”

Eirwen stumbled back a startled step. Her gaze snapped to an old Dwarven woman with long, white hair that reached the floor. Wrinkled grooves lined her face. But her eyes were bright and somehow youthful.

“I didn’t know someone lived here,” Eirwen hurried out. Then she lifted her chin. “Who are you, anyway?”

The old Dvalin fae smiled. “Most people call me the Korrigan.”

“The Grandmother . . .” Eirwen’s mouth parted and eyes widened. “I’ve heard of you.”

“Of course you have, Princess.”

Eirwen replied with a curt nod and swiveled on her heel and marched toward the door. She grabbed the iron handle and paused. Warmth tingled up her arms in soothing waves. And that’s when she noticed the bleating pain in her heart had eased when the light transformed into images. A faint lullaby still echoed in her ears too.

She turned to look at the Korrigan and gasped. The cottage, it was gone. She whipped her gaze back toward the door and gaped. Her hand was hovering mid-air where the door once stood.

“There you are!” Dalbrenna huffed. “Didn’t you hear me holler for you?”

“I think everyone did, Mother.”

“Then why didn’t you—” Dalbrenna drew in a breath and released it slowly. “We’ll talk about this later. You have a visitor.”

Eirwen stilled. “A visitor, for me?”

“Gedlen Fate Maker of the Dúnælven. Come along, child.” Dalbrenna wrinkled her nose. “No time to clean up. Sometimes Eirwen, I wonder if you even understand the meaning of ‘bathing’ or that new clothing should last longer than a week . . .”

Her foster mother kept talking, but Eirwen stopped listening. This day was, perhaps, the worst day of her entire life. How would Mo and Lu take her seriously now? And where did that cottage go? And who was Gedlen Fate Maker? Far too many questions. She wanted to ask Dalbrenna, but her foster mother’s clipped tones warned her otherwise. She was already in enough trouble.

The girl stomped behind the tall elf, a scowl on her face, dirt under her nails, her dress ripped and covered in mud. Her mind replayed images of the babe in the mirror, nor could she shake what possible reasons why the beautiful woman wanted the child killed.

It would be eight harsh winters before she finally understood.

🍂FREE BOOK 🍂 . QOTD: What is your favorite h